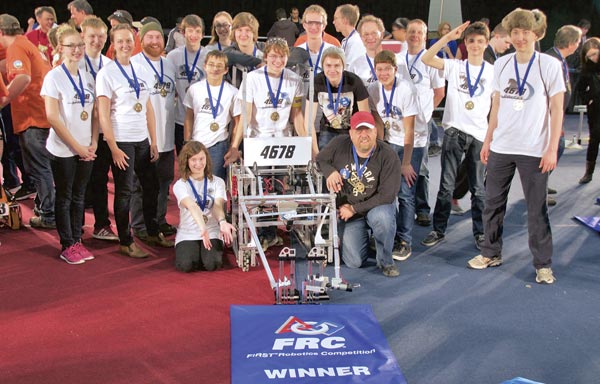 The Woodland Christian High School Cyber Cavs took first prize at the First Robotics competition in North Bay Mar. 26­28, earning a spot at the world championships in St. Louis, Missouri later this month. [Submitted]For a relatively small and inexperienced team with some 20 students onboard – other schools they compete against top 80 kids – it's a major accomplishment for the Breslau­area school.

The 2015 season has been a strong one for the Cyber Cavs. First, the group made it to the semi­finals at the University of Waterloo event March 20­22. Then, they followed that up by taking the top spot at the North Bay Regional Competition March 26­28. Next up, they'll take on the best of the best at the world championships in St. Louis April 22­25.

First (for inspiration and recognition of science and technology) robotics competitions have been running since the early '90s, as a means to get students interested in and involved with applied and computer sciences.

Over the last two decades, it has evolved into a real spectacle, with thousands of teams participating all over the world.

But just taking part is not an easy feat.

"The fact that we've won a regional in our third year, as a very small team of about 20 members, it really brings us out."

Each January, First Robotics unveils an entirely new competition, demanding new, unique robots to be built from scratch every season.

Then, the race is on to design, program and build the robot to fit the game's structure by mid-February when inspections take place.

This year, the game calls for robots that can stack rectangular plastic "totes" and large upright recycling bins into specific arena locations for points. The more totes and bins the robot can stack in the two and a half minute time span, the more points they receive.

And while the idea may seem a bit monotonous at first, watching six robots speed around a small enclosed arena, furiously stacking and spinning around as fast as possible is quite exciting.

This iteration also calls for some inter­school teamwork, as the game pits teams of three against one another.

It all leads to a truly unique learning experience.

And for the 20 or so kids involved this season, the hard work has paid off.

"I think a lot of (our success) comes from the experience the students have gained," Vanderkooy explained. "They've learned from the mistakes that we've made last year and the year before, and they've built up from there."

Whatever you're interested in, there are mentors who can help you." Robot driver Andrew Veldhuis concurred.

"I like the fact that there are so many different aspects to it," he explained. "It's almost like running a small business. There are the mechanical and programming sides, just making the robot work in general. But there is also a huge business side to it, including public relations and community outreach."

Now that they've earned a spot at the worlds this month, club veteran Nat Stroobosscher says the team is really starting to make a name for itself.

"The fact that we've won a regional in our third year, as a very small team of about 20 members, it really brings us out."