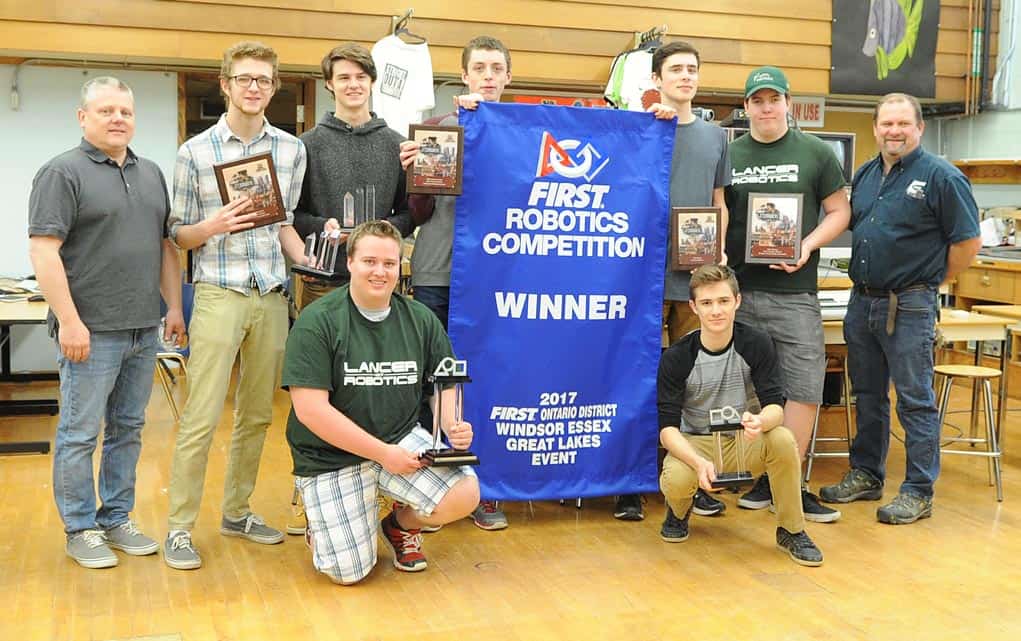 Two local high school robotics teams found themselves among the final group of competitors at an international event last month in St. Louis, their creations taking on the best from some 33 countries.

Team 4917 and Sir Lancerbot from Elmira District Secondary School and Team 4678, CyberCavs, from Woodland Christian High School made the trek to St. Louis for the FIRST Robotics Competition Championship.

The international high school robotics competition, FIRST (For Inspiration and Recognition of Science and Technology) Robotics Competition facilitates the opportunity for students and mentors to put team built robots to the test.

The season begins with teams being briefed on the year's challenge. Teams are then given a total of six weeks to build a robot, from there the road to worlds begins with a regional and provincial competition that qualifies teams for the championships in St. Louis.

It is an incredible amount of work in a short period of time: designing, building, making all of the revisions on the robot. Even from the first time you compete to the final time you compete, there are significant changes that happen on the robot based on its performance," Jon van Pelt, principal at Woodland Christian High School.

WCHS has competed at worlds the past three years, last year winning their division.

"We were really happy with this year," said van Pelt. "Most people tend to think of it as simply robotics and programming, but there is so many other aspects to it in terms of public relations, social media, fundraising, developing a business program. One of the strengths of our team this year was scouting and strategy so kids can get involved in a variety of different ways which just makes it a fantastic program that includes more kids. So it has been a really exciting year."

Similar to the WCHS, Sir Lancerbot was beat out in their division finals.

"We worked every bit as hard as last year and we came this close and didn't make it, so it was a pretty sweet feeling I think for the team to actually get there," said Ron Fletcher, computer engineering technology at EDSS and lead coach for the team. "For me it was a great reward, but it was also a great teaching moment, your hard work paying off over the year. So to make finals we were ecstatic to say the least."

Two of the 25 EDSS members had been to worlds four years ago in St. Louis, for the rest of the team it was a completely new experience.

A first-time team member Carson Cass, a Grade 12 student, moved schools to be a part of the team after watching the regional competition last year in Waterloo.

"Last year I went to the competition in Waterloo and it was so energetic and big, I don't know the energy was good enough that I was interested in joining this year," he explained.

Cass said the experience of attending worlds in his first year on the team was nothing like he could have imagined.

"Worlds in St. Louis was a whole new level, it was huge," said Cass. "The event went very well. We made it to the finals in our field so we were just one step away from making it to the best of the best, the last game."

Mentors from various businesses help the students with each facet of the experience, from the fundraising and marketing to the coding and physical build of the robot.

"People think 'oh kids got together to build a robot' and probably its more accurate to say a community got together and mentored these guys to build an amazing robot and that I think with this community you can't really quantify that," said Fletcher. "This is a community that invests and we are lucky to be here for sure, I would say it makes a difference for sure."

The season cost for teams to make it to Worlds is between $40,000 and $60,000 to build robots, travel to the competitions, and cover the registration for the events themselves.

"The financial commitment is substantial and we get a lot of support from businesses to make this happen," said Fletcher.